It was a dark and stormy ni . . . Oops, that was last month. It was a bright, bright, bright sunshiny day. In May. I had misplaced my cell phone and by the time I found it I had three new voicemails. First was from Mastercard wanting to know when they could expect the payment that was due on April 6. Press 7 to delete this message the automated voice said. I pressed 7. Next was from the semi-attractive 65-year old blonde lady from the on-line dating service. “Not if you were the ONLY man left on the planet”, the non-automated voice said. I pressed 7 again. Third one said, “Hi Art, let’s go riding. This is Jerry Neal. Give me a call”. Well, as Ernestine from the phone company on Laugh In says, “One ringy-dingy, two ringy-dingies, 3 ringy-dingies” and I’m talking to Jerry.

We set up the three days before Mothers Day to head for the dez. He and Rich Stevens were going out Wednesday morning and chose Teagle Wash as a good place to meet. Coincidentally, the same place where the Badgers were holding their Mothers Day Cop Out Dual Euro. I figured it just doesn’t get any better than this. Two days of play riding with good RUTSters and a weekend of racing with the Badgers. With the new Scotts stabilizer installed and freshly applied D-37 numbers, I was in for a fun week. I showed up late Wednesday night, and after a gourmet omlette Jerry fixed for us the next morning, we set out on a ride. 90+ temperatures kept the ride fairly short. I had only one minor miscue, and we rode back to camp for Knockwurst lunch. Spent the afternoon in the air conditioned comfort of Richard’s trailer.

Friday morning was more of the same. We had a sort of shorter ride and Rich decided to stay at camp. Jerry and I took off for the trails on the west side of Trona Road. After about ten miles of fun trails I managed to do an excellent face plant on a downhill. Pilot error mixed with a taste of stupidity left me with a badly bruised left leg, aching shoulder and sore ribs. We limped back to camp. 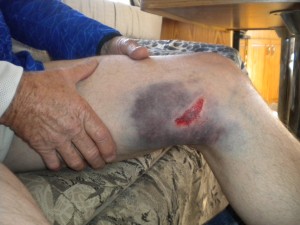 Since just crawling out of bed Saturday morning turned into an ordeal, I knew racing was out of the question. We had set up RUTS camp and arrowed the road in. Don Rager came down from Bishop and chased Paul Krause in the Senior-Magnum expert race. Paul won. Don had high praise for the course. It was fun with only a smattering of short rock sections and some twisty trails. No bike beater-upper parts. Rich and Jerry loaded up after Don came back and they all left for their respective abodes.

Sunday morning was a little cooler, high 80’s and Don and his wife Karen showed up. Don is a hard core racer. He drove back to Bishop Saturday, grabbed his wife and some beverages and came back to Ridgecrest and spent the night at the local motel. He showed up Sunday morning, ready to race. The B Course was across Trona road in an area that gets used often when races are held up there. This was a faster course, not a lot of whooped out sections, mostly a lot of fun again, according to Don. Paul Krause was lapping the course in 13 minutes,taking home first place honors again (unofficially).

Don and Karen drove back across Trona Road to camp and loaded up my Husky for me and headed north. I headed south, stopped at Astro Burger for a chocolate shake. A small reward to make up for all the fun I missed simply ‘cuz I fell down. I would like to think it was all because of the street legal tires that come on the bike, but we all know better, don’t we? If you think after staying ’til the end of this, “That’s five minutes of my life I’ll never get back” you can blame Dennis Holt. He is a RUTS member, currently doing missionary work in the Republic Of Georgia, half way around the world. He put me up to this.