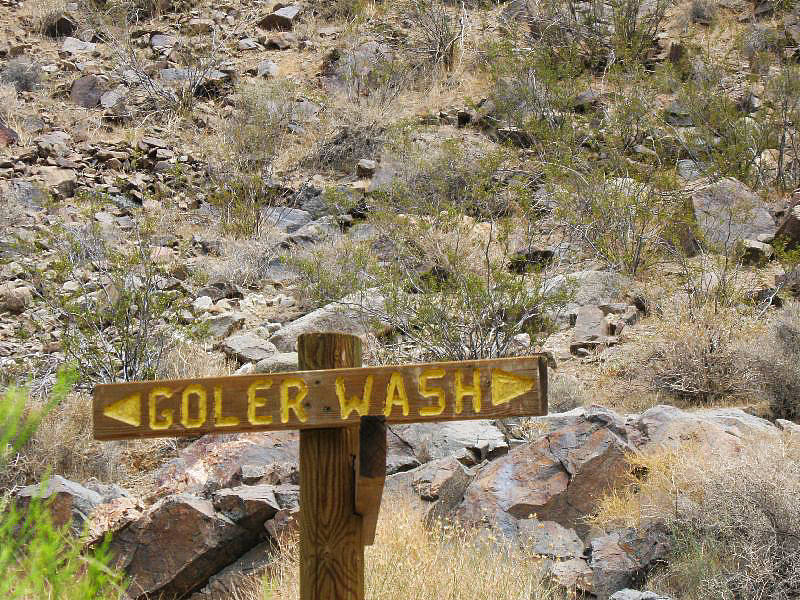 Beautiful desert, beautiful weather and great people. We had it all at the Lost Mine Poker Run last month near Goler Gulch. The predicted rain held off until Sunday so we were able to ride the Poker run loops without raingear and enjoy the vast carpets of wildflowers with very comfortable temps. My brother Paul and four friends from Montana arrived at Goler Gulch a week early so they could take a long break from winter back home. They enjoyed a week of warm weather and 100 mile plus riding days with a few trips to Ridge crest for bike parts. When I arrived at camp on Thursday Tom Moore Jr.  was already set up with his family in their trailer and another trailer was parked nearby that contained two long-time club members and desert racers Jerry Neal and Rich Stevens. More trailers pulled in Thursday night and Friday morning including the Estradas, Matsons and Moores. Randy Hettema showed up with a borrowed enclosed trailer so he was able to help me ribbon and set up checks on the 40 mile loop with Tom Jr. while Tom Sr. and Lil drove in their Rhino with Cricket. The 40 mile loop headed east from camp to Hwy. 395 and then swung north to the first check located in a mine. From there the route went into the hills near two radar installations, down a canyon to another valley and then further north on some single-track almost to Ridgecrest where check 2 was under a railroad bridge. Six miles of rocky jeep road led to check 3 which was at a stream bed where ancient petroglyths were carved into boulders. Six more miles of jeep road brought the riders to check 4 which was l d t e d deep inside a mine where three mice watched over the cards. After a climb up a steep rocky hill the route took everyone up into some hills where check 5 was waiting inside another mine before everyone made it back to camp. Friday afternoon David Alabran helped me ribbon the 15 mile loop which took riders up Goler Gulch to the first check inside the “Lady K” mine, then up the sandy wash to an old cabin (Maddog’s retreat) where check 2 waited on a shelf. Check 3 was in the hills inside another mine and then the route went out into a broad valley among the wildflowers before descending a razorback ridge and then further into the El Paso Mtns. where check 4 waited inside the “mice” mine. From there the route led up a steep rocky climb (which claimed a few victims) or around on an easier alternate to check 5 inside another mine, then down Mesquite Cyn. for the trip back to camp. Saturday morning 90 riders set out with their maps; 47 on the 40 mile loop and 43 on the 15 mile route. I decided to ride the 15 miler with Reuben Shaw, Keith Jaramillo and Debbie Beaumont. After check 3 we came up on the Harris’ Suzuki Samurai stuck on the razorback ridge. Sonny was inside, Mark Matson was hanging off the side trying to keep the Samurai from rolling sideways down the hill and Janet and the kids were watching from a safe distance, having exited the vehicle when it started leaning precariously off the ridge. A little back and forth got all four wheels back on the ridge and we all continued on to check 4 where there was quite a crowd going in and out of the mine to get a card and see the mice. We took the alternate around the steep rocky hill to avoid further drama but others tackled it, including several kids on rnini-bikes and quads. Jerry Neal looped his bike on the hill and wound up with a stiff neck. He and Rich Stevens rode the long loop with Michelle Parlier (Klinger) who was getting used to her new Rekluse automatic clutch. At the end of the day only one group was not accounted for: my sister Cathy, her husband Anthony and their two kids (Leah and Anthony Jr.). Scott Burnett had helped them earlier in the day when they couldn’t find check2 and now it was getting close to 6pm without their return to cam’p so Scott volunteered to head out backwards on the loop to look for them while my brothers Steve and Paul and nephew Weston planned to search the hills between camp and Mesquite Cyn. The search was a short one as the Saldanas made it back to camp following the ribbon just before dark after a 7 X hour adventure. Around the campfire that evening they thanked the people who helped them during the day; Scott Burnett, John and Lloyd Burgess and Matt Jarrett and family (new members) all had a hand in getting them around the loop. Saturday night we enjoyed a great campfire with worship led by Sandy Estrada. I talked a little about the gold rush that took place in Goler Gulch in the 1800’s and about how mining towns had such short lives and the spiritual significance of our short time on this earth. Scott set up the coffee and quite a few people brought out desserts to share, including Sarah Jarrett who made cowboy cobbler in one of those iron pots that you put in the coals. Mmmmrnm. A big thank you to Randy, Tom, Lil, Paul, Steve and Weston who helped pull ribbon in the rain on Sunday and Randy for setting up the EZ- up and sound system and generally helping me put on this event every year. And for all you riders who showed up and made it a fun weekend and contributed’over $1800.00 for the Holts, I’m going to repay you by finding more dangerous mines for you to crawl into next year ( and I promise that the 15 mile loop will be much easier).

Here are the Poker Run Lost Mine 2011 results!