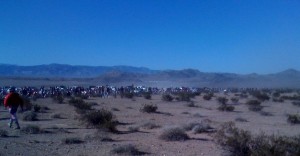 Race report for Desert MC 1/23/2011
We had 8 RUTS members and 4 Guest racers for this race. Art Whitney and Julie “Brownies” Angel were running the pits, The Rager Family got our spot on pit row and also had two family members Cindy and Lane run the alternate Gas pit, John Wiltsey, Brian Hall and Jack Fuller also helped at both pits. Pit assistants were Michelle “pit mom” Green and a guest pit Family, the Dittman’s from Barstow. I slept most of the day in my chair watching the action unfold in the pits. The Race was delayed due to a downed rider on the road to the start. When it did get under way it was pure carnage for rider and bike. As for RUTS, we had two DNF’S. Cody K. as he had a minor crash. Travis “T-Bone” Green toasted my KX 125, and had an all-day adventure along with 15 other racers all in the same area.

Watch Travis’s crash at 45 seconds into this video. It looks like the poor guy fried his clutch. Not sure. Some rode back others were hauled back. The call went out for trucks to haul bikes and racers in from all over the course. It was a District effort to get them in. We had a guest rider who broke down next to the Marine base, was repaired, and brought back convoy style. John L also DNF’D but he made it back on his own. It was getting late. We had one guest rider outstanding so the search began over the radio. Due to the number of injured riders and broken-down bikes we could not get any solid info on our rider. He was found by sweep about 5 pm and was able to make it back on his own. Why was he out so long? Brian Chung number 174, gave up his race to help a female out-of-state rider who was injured and stayed with her till Sweep came through. I would like to say thank you for doing the right thing and using your head out there. You are welcome to pit and race with us anytime. A big thanks to Art, Julie, the Fuller and Rager families for their help in the pits, and a big thanks be to God for a safe Race and a safe ride home. George Green. 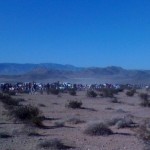 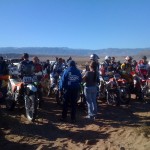 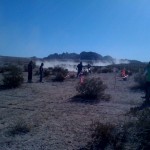 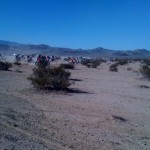 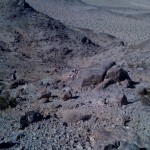 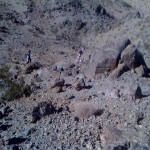