I arrived at the District 37 Awards Ceremony February 19 early at 4:30 p.m. and it started snowing hard. It stopped shortly thereafter. It made me wonder how many people were going to show up, though. The event is held at the Hilton Garden Inn in Victorville, and even though it’s in the large banquet hall, every year the room gets filled up. The bad weather didn’t stop the people from coming, because once again, it was soon standing room only.

The ceremony started late at 6:30 p.m., probably to let everyone have a chance to arrive due to the snowy conditions on Cajon Pass. By then, RUTS members George, Michelle, and Travis Green, Dave and Matthew Krenik, Rodney Roderick, and Jack, Laura, and Sam Fuller had all shown up and had gathered together at one table that had the RUTS flag flying proudly. Unfortunately, the Ragers were unable to come down from Bishop, as it was just too long a drive.

The Awards Ceremony was great! I sold the remaining raffle tickets for the KTM530EXC I had left before 6 p.m., so I was able to visit with people and enjoy the evening.

It was fun to pull the winning ticket for the KTM530EXC raffle bike. Chito Pastor, a dual sporter, was the winner. Too bad he wasn’t present. He bought ticket #62 at the Long Beach Motorcycle Show.

Sherri Kibbe was acknowledged for her hard work for putting together the Awards Ceremony. She does this year after year.

Ed Waldheim won the Norm Stuart Award. He was worked for decades to keep the land open for riding. He warned us that it’s the 10% of people riding illegally that will get the land shut down for everyone. These people need to be stopped and educated about the damage they are doing to the other 90% of us.

Frank Brewer won the Sportsman of the Year Award. He’s in the Checkers and is in the 60+ class. 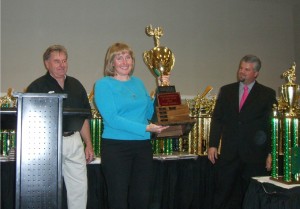 I broke out in tears when I heard my name called for the Sportswoman of the Year Award. I couldn’t believe, after being nominated for four years, that I won it. I enjoy selling the raffle tickets for the D-37 Legal Defense Fund so much, even though it’s a lot of hard work, and baking all those dozens of batches of brownies so everyone buys those tickets. It’s an honor to have won the award. All three of the other ladies nominated–Patty Blais, Sherri Kibbe, and Tracy Kennelley, are very deserving of the award, and I accepted it for all four of us.

A highlight of the evening was having Justin Imhof present with us. Justin had a bad crash months ago at the Baja 1000 and was in a coma for weeks. When he walked up to the stage to accept his two awards, the audience fell quiet with a hush, then greeted him with huge applause. When he went up to collect his second award, his father went up with him, thanked D-37 for everything we’ve done for the family, and let Justin say a few words. A standing ovation followed and probably quite a few tears were in many people’s eyes.

Lots of prizes were given out to people who bought $1 raffle tickets, and the proceeds went to Justin Imhof to help with his recovery.

The awards were all handed out by 10:30 p.m. Instead of hanging around, as the crowd usually does, people cleared out the door because of the bad weather. Most of us had to drive down Cajon Pass in the snowy conditions. It was scary! I was glad I had Paul Flanders (Dual Sport Referee) with me in the car. He kept telling me to stay in the tracks of the car in front of me. Everyone was driving around 35-45 miles an hour. We couldn’t see the lanes on the ground a lot of the time. The snow didn’t stop until after we reached the 215/15 split at the bridge over Lytle Creek, believe it or not.

It was a fun evening and I told my fellow RUTS members that it meant a lot to me to have them around me as I received my special award. It seems like I have been the only RUTS person at the awards the last few years, and it was really special to me to be surrounded by my Christian

friends as my name was called. I thanked them all later for being there.

Maybe we’ll have even more RUTS members receiving awards next year. Hope to see you there!